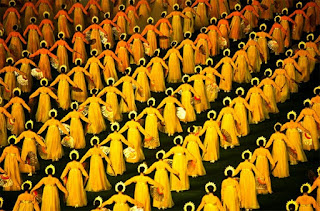 North Korea's famed Mass Games is being put on pause, according to tour groups that organize visits to the country, two days after Kim Jong Un was reported to have criticized the creators of this year's performance. The Games, a uniquely North Korean propaganda spectacle involving tens of thousands of performers, typically last for several months.

This year's pageant, which premiered on Monday evening and was expected to run until October, will be suspended from June 10, said Simon Cockerell of Koryo Tours, a specialist travel company that helps Western tourists visit North Korea. Cockerell told CNN that his company's partners in Pyongyang had informed him on Wednesday that the Games would be suspended. It is unclear when the Games will resume.