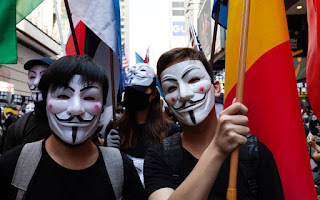 Hong Kong woke to a city transformed Saturday, after protesters went on a rampage across the territory in reaction to the government's use of emergency powers to ban masks at demonstrations.  The city's Mass Transit Railway (MTR) network suspended all of its operations after demonstrators vandalized multiple train stations, setting fire to entrances and smashing ticketing facilities. Numerous mainland Chinese-owned banks and stores were also targeted by protesters.

All of the city's 161 MTR stations remained closed Saturday, as did many major shopping malls, bank branches and supermarket chains. Many of the grocery stores and banking facilities that were open had long lines reminiscent of the run-up to typhoons, as Hong Kongers withdrew cash and stocked up on supplies.