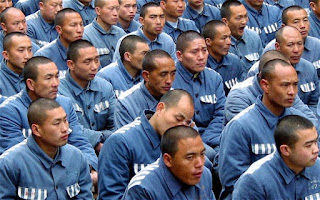 The Chinese region of Xinjiang is home to millions of ethnic Muslim Uighurs who have lived there for decades. Rights groups say hundreds of thousands have been detained in camps without trial, but China argues they voluntarily attend centres which combat "extremism". The BBC went inside one of them.

I'd been to the camps before. But the closest I'd managed to get on previous visits were snatched glimpses of the barbed wire and watchtowers from a passing car, while the plainclothes police officers tailing us tried to stop us getting any closer. Now I was being invited inside. The risks of accepting were obvious. We were being taken into places that appeared to have been carefully spruced up - with satellite images revealing that much of the security infrastructure had recently been removed. And one by one the people we spoke to inside, some of them visibly nervous, told us similar stories.