China's new firepower: What you might see in Beijing's National Day military parade 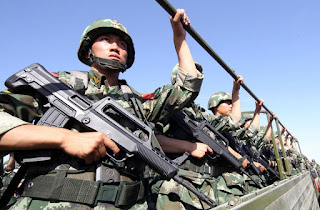 Powerful, domestically-built and in the People's Liberation Army arsenal right now -- China is expected to show off some of the most advanced weaponry the world has ever seen during a special National Day military parade in Beijing on Tuesday, October 1.

About 15,000 personnel, more than 160 aircraft and 580 pieces of weaponry and equipment will be part of the 80-minute procession through the Chinese capital, which will highlight the country's military advances in the 70 years since the founding of the People's Republic of China. Key among those is drone technology -- of which Beijing boasts some of the world's best -- and advanced missile systems.

Maj. Gen. Tan Min, executive deputy director of the Military Parade Joint Command Office and deputy chief of staff of the Central Theater Command of the People's Liberation Army (PLA), said at a press briefing this week that all weapons to be on display were in service and made in China, highlighting the country's ability to innovate in defense research and development.