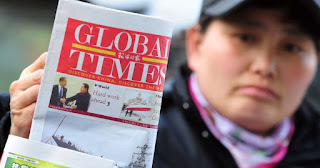 The editor of one of China's most outspoken state media outlets has doubled down on accusations that the United States is instigating a revolution in Hong Kong, as increasingly violent protests enter their eleventh weekend.


"Unrest on the street needs spiritual support, incitement and encouragement -- and that's exactly what the US and the West are offering, in a very deliberate and intense way," Global Times editor-in-chief Hu Xijin told CNN on Thursday, in his first interview with foreign media since one of the newspaper's reporters was assaulted by protesters in Hong Kong.

A former war correspondent for the People's Daily, the ruling Communist Party's official newspaper, 59-year-old Hu has a loyal following in China, where he posts daily commentaries in writing and videos to nearly 20 million fans on Weibo, China's equivalent of Twitter. His presence on Twitter, which has long been blocked in China, is a more modest 75,400 followers.