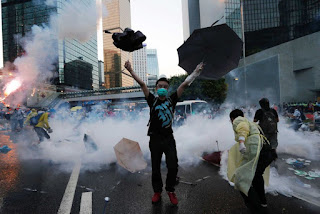 The Hong Kong government has warned protesters could push the city into a "very dangerous situation" after another weekend of demonstrations paralyzed traffic and transformed an iconic shopping district into a battleground. Protesters swarmed the streets of Causeway Bay on Hong Kong Island on Sunday night, blocking key roads in the ninth consecutive weekend of political unrest. Police fired a barrage of tear gas in a bid to disperse the crowds.


Earlier, in a separate demonstration in the eastern New Territories, a group of protesters gathered around a police station, throwing objects and breaking windows. General strikes have also been organized for Monday morning, as well as demonstrations in seven different parts of the city.