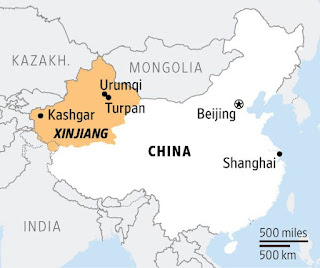 To belong to a nation, citizens should have rights and obligations that are protected by law. Even though China claims that the people of East Turkistan, the Uyghurs, and other ethnic Muslims are an ethnic minority in China and belong to the Chinese nation-state, their existence and their rights are not protected by Chinese state law. The people of East Turkistan are rather facing destruction under the guise of China’s nation building. Chinese state policy writers such as Hu Angang and Hu Lianhe are trying to disguise their painting of these ugly pictures with words such as “nation building” and “great revival” to conceal genocide and ethnocide in East Turkistan. However, nothing can hide China’s true colors, despite how stubbornly the Chinese government pretends to fit in with the civilized international community by hiding its imperialistic colonialism in East Turkistan.
In conclusion, if the world remains willfully blind to China’s genocide in East Turkestan, the whole world will accept China’s lie and China will control the future, as George Orwell [28]famously wrote:  - And if all others accepted the lie which the Party imposed, if all records told the same tale, then the lie passed into history and became truth. “Who controls the past,” ran the Party slogan, “controls the future: who controls the present controls the past.”
Read more
kl. 15:06