China could overwhelm US military in Asia in hours, Australian report says 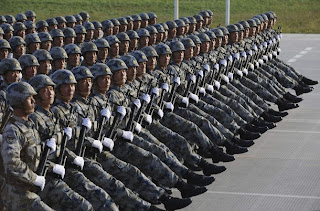 The US military is no longer the primary force in Asia, and missiles from China's rapidly improving military could overwhelm its bases in hours, according to a new report. The study by the United States Study Center, at the University of Sydney, in Australia, warned that America's defense strategy in the Indo-Pacific region "is in the throes of an unprecedented crisis" and could struggle to defend its allies against China.


That means Australia, Japan and other US partners need to build up and refocus their forces in the region, and consider increased cooperation with the US, to ensure their security, the study claimed.

The report highlights areas where China's military is making huge strides in comparison to the US and its Asian allies and partners. Chief among those is in missiles.
"China has deployed a formidable array of precision missiles and other counter-intervention systems to undercut America's military primacy," the report states. Those missiles number in the thousands, the report says.