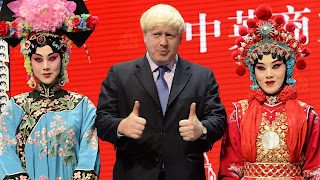 US President Donald Trump's warm overtures to Britain's new Prime Minister have been widely covered since Boris Johnson took power on Wednesday.  But with the new UK leader under pressure to deliver Brexit and an economic revival, it might be Chinese President Xi Jinping who can expect to see a warmer welcome in London.


In an interview with Johnson by Hong Kong Chinese television network Phoenix Television, broadcast for the first time Tuesday, the new UK leader hints that he might be more amicable to China. In the interview, which took place when he was the UK's foreign secretary in January 2018, Johnson effusively praises China and its leader.

"We're interested in what President Xi is doing and don't forget that the UK was the first country to sign up to the Asian Infrastructure Investment Bank, so we are very pro-China," he said, referencing the Beijing-based bank. Johnson said that he was "very enthusiastic" about Xi's signature Belt and Road Initiative (BRI) investment project and celebrated Chinese investment in the United Kingdom.