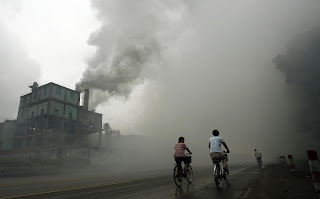 Industries in north-eastern China have released large quantities of an ozone-depleting gas into the atmosphere in violation of an international treaty, scientists have said.Since 2013, annual emissions of the banned chemical Chlorofluorocarbon-11 (CFC-11) from that region have increased by about 7,000 tonnes, according to a report in peer-reviewed journal Nature.

“Our measurements showed ‘spikes’ in pollution when air arrived from industrialised areas” in China, said co-lead author, Sunyoung Park from Kyungpook National University in South Korea. CFC-11 was widely used in the 1970s and 1980s as a refrigerant and to make foam insulation. The 1987 Montreal Protocol banned CFCs and other industrial aerosols that chemically dissolve protective ozone 10-40km (six to 25 miles) above Earth’s surface, especially over Antarctica and Australia.