Tibet and China:A Challenging Year of the Dog That Just Left us to Think Deeper 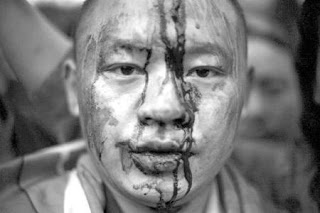 As the year of the Earth Dog comes to an end and the year of the Earth Pig ushers in, I can’t wait to wish my fellow Tibetans especially the ones inside Tibet a very happy losar. Although my only cynical displeasure is that this year Tibetan New Year falls on the same day as that of the Chinese. Not that I don’t like Chinese people, I sincerely do, but to take a day off from work with my chinese colleagues on the same day to celebrate one’s new year is uninviting to say the least.

I wish like it is already that we have nothing, nothing in common. But ever since Princess Wencheng was granted by Tang Emperor to marry the fierce King Songsten Gampo of Tibet to accord a peace deal between the Han and the Tibetans around the 6th century, incorporation of some Chinese culture, food and astrology became a commonplace.