Troubled waters: How Beijing won't back down over the South China Sea 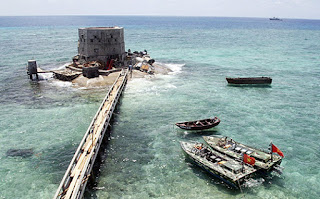 The Chinese warship Lanzhou approached from behind, swiftly turning to starboard as it tried to cut across the USS Decatur's bow. Under international naval law, the US destroyer had right of way. But the Lanzhou forced the US captain to essentially throw his 500-foot-long, 8,500-ton warship into reverse, avoiding a collision by seconds.

The two vessels came within 45 yards (41 meters) of each other in the September incident off the South China Sea's contested Spratly Islands, with the US Navy saying at the time that the Chinese warship "conducted a series of increasingly aggressive maneuvers accompanied by warnings for the Decatur to depart the area. "It was one of 18 encounters since 2016 between the US Navy and China's military that Washington has deemed "unsafe or unprofessional," and just one of many flashpoints in the South China Sea last year.

The situation isn't likely to improve in 2019, either. Tensions show little sign of easing, with some analysts predicting they could actually get much worse.