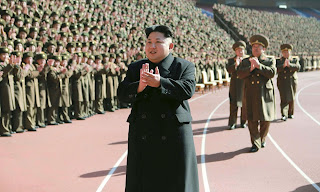 There is a strong possibility that North Korean leader Kim Jong Un is in Beijing, an official with deep knowledge of North Korea told CNN. The visit comes weeks before Kim's planned summit with South Korean President Moon Jae-in and a potential meeting with US President Donald Trump. Heavy security in Beijing and the presence of what appears to be a train that belongs to North Korea's ruling Kim family had been fueling speculation that Kim, or another high-level representative from Pyongyang, was in the Chinese capital for talks.

A large security presence remains outside the Diaoyutai State Guesthouse, where North Korean leaders have previously stayed. Police ordered a CNN crew to leave the area just minutes after they arrived early Tuesday morning. China's Ministry of Foreign Affairs said Monday it was "not aware of the situation" when asked whether a North Korean official had arrived in the country.